The Pakistan Railways, having inherited sound infrastructure, has been the lifeline of the country since its inception in 1947. It has been catering to the needs of large scale movement of freight as well as passenger traffic. After having endured some turbulent years in the recent past, 2012 has been a landmark year in the rail history of the country. 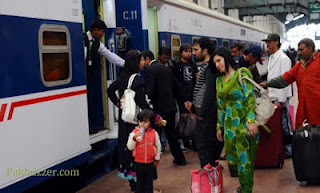 The Pakistan Business Express, shuttling between Karachi and Lahore with international facilities and providing best possible safety standards, was launched under the public-private partnership arrangement in February.

Later the same month the Shalimar Express, running between Karachi and Lahore via Hyderabad, Rohri, Multan and Faisalabad, became the second train to operate under similar partnership plan and recently the Karakoram Express, also steaming in between Karachi and Lahore, has been revamped with the addition of several new carriages which is set to improve its performance.

The Pakistan Railways has announced to implement its plan to operate a few more trains on public private partnership this year, besides purchasing new engines and repairing the existing ones to overcome the menace of delays. 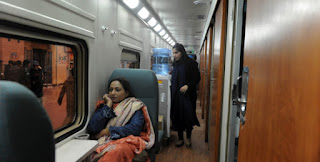 Their recent initiatives has gladdened the hearts of the people of Pakistan, who could now look forward to commuting on train again with the same pride and pleasure that they used to find in the past.

The Pakistan Business Express, being managed by Four Brothers International Pvt Ltd, is a welcome addition to attract business travellers alongwith their families and friends. It has set high standards of service quality and punctuality from the outset.

The facilities available inside train include separate cabins for six passengers, power outlets for laptops, internet, LCD with music and video channel, soft drinks, tea, snacks, dinner and breakfast, paramedical staff and direct access to local 1122 emergency service, and security guards. It’s for the first time in Pakistan that internet facility was made available inside any coach or train. 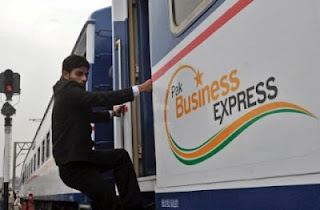 The first-ever business express train, whose travel time from Karachi to Lahore is 18 hours, had completed its debut journey from Lahore to Karachi quicker than anticipated. It had touched the Karachi Cantt Station at 9.45 am on February 4, which was 15 minutes ahead of the scheduled time. The train had left Lahore at 3.30 pm on February 3 for its first journey.

The reservations for the Pakistan Business Express could also be made online and the tickets are delivered at the home/office of the client. Their reservation offices at the railway stations in Karachi and Lahore have also been functioning efficiently. They have also introduced business budget class for Rs: 3,500 but the package doesn’t offer meals and video channels.
Posted by Editor at 9:59 AM