Commodore (Rtd) Syed Sarfraz Ali SI (M) has been appointed as the Registrar of the Sir Syed University of Engineering and Technology (SSUET), Karachi. 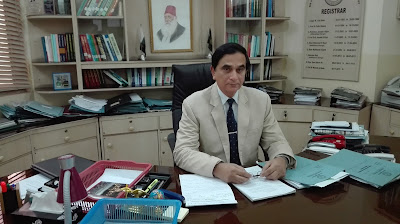 He has joined the institution, having carried out his major assignment, the recently held 19th Convocation-2016 of the SSUET, in which he conducted the proceedings.

He has vast experience of teaching and training. He was Dean of Electrical Engineering Department of the Pakistan Navy Engineering College (PNEC) affiliated with NUST. He has also served as Vice Principal of the College.

Commodore (Rtd) Syed Sarfraz Ali also has had extensive exposure to project management, having served 35 years in Pakistan Navy and over 11 years in MTC (NESCOM) as Director.

He has the unique distinction of undertaking and successfully completing the biggest modernization program of naval ships in the whole region.

While in MTC (NESCOM) he has set up state of the art research centres for R&D and development of systems related to microwave, underwater detection and simulators for various defence applications.

His research interest is in the field of Telecommunication and Underwater Acoustics. He has been the coordinator of the Underwater Acoustic Chapter of the International Bhurban Conference on Applied Sciences & Technology (IBCAST), which is held regularly in Islamabad. He is also the President of Navy Housing Scheme (Karsaz).
Posted by Editor at 1:47 PM