The students of the GIFT University, Gujranwala, successfully organized their fifth blood donation camp with the collaboration of Sundas Foundation at the STAR Institute Gujranwala Campus and the event was sponsored by TREEPAK International, Super Salt Lamps, Choice and General Asia Ceramics. 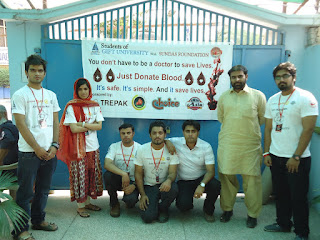 The GIFT University students proved it once again that they are committed in saving the lives of the needy children’s that are in severe blood diseases like thalassemia, hemophilia and blood cancer.

The energetic students of the GIFT University renewed the pledge to keep on working for the noble cause despite the hurdles and hassles coming their way.

They believed in letting their work to do the talking and they acknowledged the support of every individual and organization helped them in making the activity successful.

The students of the GIFT University who took part in that blood camp were Ehtesham Ahmad, Maria Dilawar, Shumail Khan, Ali Hassan, Hasnain Haseeb and Rana Haseeb-ur-Rehman. They deserved praise for having taken up the noble cause that would indeed be helpful in saving many lives. 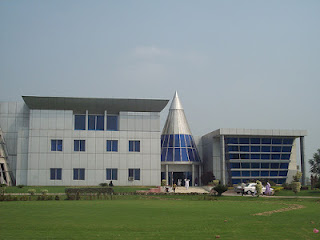 The spirit of the youngsters of mobilizing their energies and resources for carrying out an activity for the community needs to be recognized and it should inspire others to follow suit.

The GIFT University, which has become one of the premier educational institutions being one of the very few universities in Pakistan to be awarded HEC’s W category, should be proud of such dedicated and proactive students who are earning them tremendous goodwill with such activities.

The GIFT University, founded in 2002, is situated in the historic city of Gujranwala, which is set in the backdrop of lush green fields. It was the capital of the Punjab when Maharaja Ranjit Singh ruled the province for almost 40 years.

Located at about 67 km from Lahore on both sides of the famous G T Road, Gujranwala is the fifth largest city in Pakistan and the third largest city in the Punjab with a population of more than four million people.
Posted by Editor at 11:51 AM