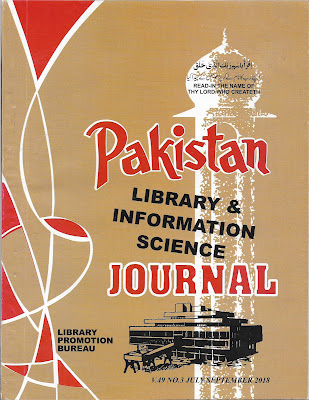 The Pakistan Library and Information Science Journal (PLISJ), a quarterly publication of the Library Promotion Bureau (LPB), Karachi, has continued smooth sailing in its journey of the 49th year as the July-September 2018 issue (Volume 49, Number 3) has arrived once more at the designated time.

The PLISJ, hailed as one of the leading research journals of the country, has remained successful in bringing out four issues every year since its inaugural publication about half a century ago.

The LPB, a non-governmental body of library scientists, is credited to have published the quarterly journal as well as other books related to the profession on self-help basis for more than five decades now.

The PLISJ Chief Editor, Prof Dr Ghani-ul-Akram Sabzwari, who is also the Founder President of the LPB, and the Deputy Chief Editor, Prof Dr Nasim Fatima, have been chiefly responsible in keeping both the entities alive despite the lack of support from the various stakeholders of the profession.

The July-September 2018 issue of the PLISJ, as usual, is rich in content, with its title looking particularly attractive in the combination of red and golden colors. Between the covers, there are contributions from eminent library scientists and scholars from different parts of the country as well as abroad.
Posted by Editor at 11:28 AM 2 comments: 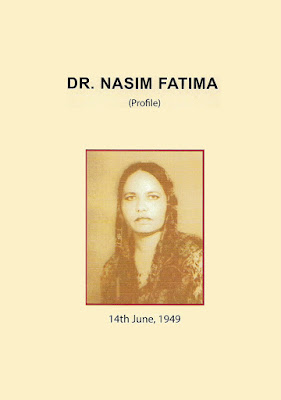 Prof Dr Nasim Fatima, one of the luminaries in the field of library and information science, has recently been profiled in book form.

The kind of success she has enjoyed over the years and the accomplishments of hers surely merited a more attractive and comprehensive publication than the 32-page booklet which seems to have been brought out in a haste by one of her quiet admirers.

The intention is absolutely spot on but the execution has left lot to be desired. Obviously Prof Dr Nasim Fatima deserves to be the subject of a book again and again as her numerous achievements remain a source of inspiration for the scholars in particular.

In a professional career, spanning quite a few decades, she has earned numerous distinctions and, more importantly, she has been able to do so by overcoming far too many challenges.

Having served as the chairperson of the Library and Information Science department at the University of Karachi, she has continued guiding the younger crop of fellow professionals from the platform of the Library Promotion Bureau (LPB) and the Bazm-e-Akram.
Posted by Editor at 10:05 AM 3 comments:


The Foundation for Research and Human Development (FRHD), with the support of the Terre Des Homes, Germany, organized a medical camp in continuation with their efforts for social uplift and welfare of the labourers, women, children and marginalized and neglected slum of Area 34/3, Labour Square and adjacent vicinities of Korangi Industrial Area, Karachi. 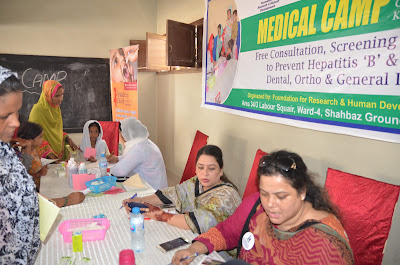 The Country Coordinator of the Terre Des Hom, Salam Dharejo, highlighted the objectives of the camp and stated that the area was considered station of industrial workers mostly children and women having nominal wages resultantly unable to get proper medical treatment.

It was also brought to light that it was a thickly populated, unplanned and without proper sanitation area with heaps of garbage and sewage in streets causing increase of multiple diseases including skin problems due to chemical waste coming from the nearby drains/ sewerage lines. Besides, residents are badly affected due to non-availability of potable water. 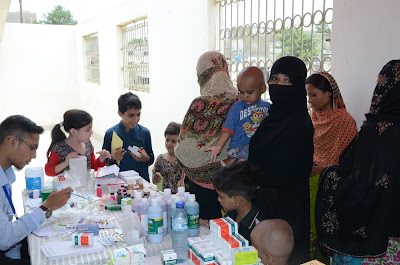 Nazra Jahan, Executive Director, FRHD, stated that the camp was undertaken as the majority of the residents have to access to health facilities and since the area is located in the industrial area they are facing multiple problems such as eyes infection, skin problems as well as Hepatitis B & C whereas the minors are facing malnutrition badly affecting their health and growth.

She informed that a total of 728 patients including 153 children, 268 women and 307 male visited and were able to get free advice/consultation, screening and treatment to prevent Hepatitis B & C, eye, dental and Ortho diseases at their doorstep.

She also appreciated the efforts and cooperation of senior doctors, students of medical colleges and paramedical staff who attended the patients throughout the day. 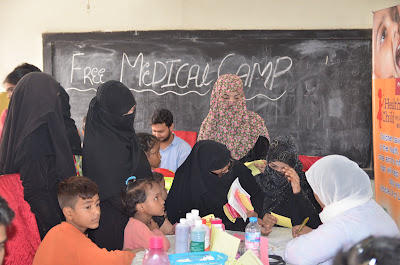 114 patients were referred for screening and having found four patients affected from hepatitis B & C (two each) were sent to Saylani Welfare Trust for free medical treatment and medicines, according to lab technician, Muhammad Arif.

Dr Lubna Nasir, RMO, Abbasi Shaheed Hospital, Karachi, was of the view that majority of the patients inclusive of children were suffering from diarrhea, skin diseases, malaria, sore throat and chest congestion. The patients of chicken-gonya were also found. The children were found anemic with malnutrition issues due to poverty.

Dr Muhammad Shoaib Shah, HO, Abbasi Hospital, revealed that the main problems diagnosed include anemia in males and females, skin diseases, asthma, malnourishment in both adults and children, and arthritis. Most of these diseases were caused due to poor hygiene of the people in the area. 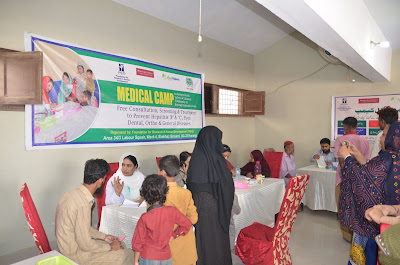 Dr Muzammil reported that mostly people are suffered from allergies due to environmental pollution. According to him 5 patients were registered to refer for cataract surgery. General eye checkup of 98 including children, men and women was conducted.

The dentist reported that quite a good number of patients complained about tooth ache and most of them caries and need RPD. 10% of the people were referred for scaling.

Dr Saima Bashir felt that the main cause of all these diseases and infections was malnutrition and poor hygiene.

The camp also aimed to educate the community about personal health, hygienic, child health care, prevention of diseases and sanitation of living areas. The parents were also advised on curable diseases of children and women counseled on mother/ child health related matters. The camp received good response from community and was commended by the local leaders.
Posted by Editor at 3:59 AM 2 comments: 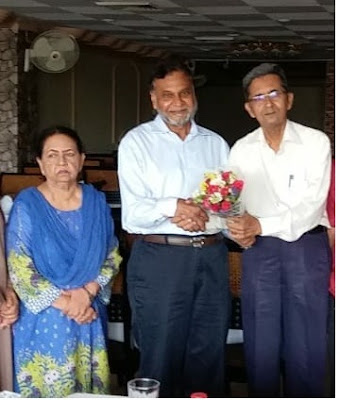 The visiting library scientist, himself a student of the great Prof Dr Ghani-ul-Akram Sabzwari, made the generous offer during a luncheon reception hosted in his honour by Bazm-e-Akram at Usmania Restaurant in Karachi, on July 9.

Prof Dr Nasim Fatima, one of the founder members and the moving spirit behind Bazm-e-Akram, appreciated the offer but sought advice from the USA-based Prof Dr Ghani-ul-Akram Sabzwari, in whose honour the forum has been established by his former students, before granting the approval.

Shakil Ahmed Khalil, who has been quietly supporting Bazm-e-Akram in the past as well, reckoned that Adab-o-Kutub Khana, the iconic publication of the forum, should be brought out a couple of times during the year instead of just one time. 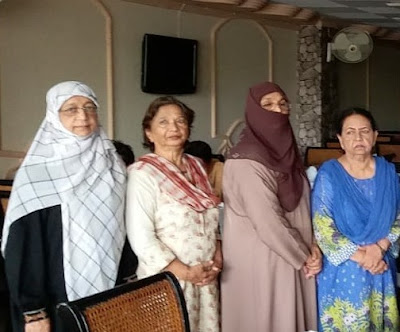 “Obviously more funds would be needed to meet the additional costs of printing and postage. For this purpose I volunteer to arrange for a sum of Rupees two and half lacs with the collaboration of my colleagues in Saudi Arabia and I sincerely hope that the other supporters of Bazm-e-Akram will also come forward with their contributions to make it a sustainable platform,” he added.

Meanwhile the suggestions of Owais Jafrey, one of the members of Bazm-e-Akram living in Seattle, USA, aimed at promoting the forum and its publications, were also discussed at length during the meeting.

Prof Dr Nasim Fatima appreciated the contents of the email shared in this regard by Owais Jafrey on July 8, in which the possible measures were suggested to do something to activate and change the lethargic attitude of librarians and muster support to awaken them for collective betterment. 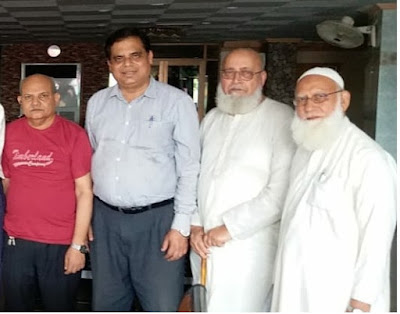 She disclosed that sporadic efforts had been made in the past in this direction but the results were disheartening and heart-breaking.

She regretted that even the concerned library science departments of the various institutions were cold-shouldering the requests to promote the literature developed by their teachers and mentors.

Shakil Ahmed Khalil, however, felt that there was light at the end of the tunnel and greater efforts must be made to motivate the librarians community for carrying forward the mission of Prof Dr Ghani-ul-Akram Sabzwari and Prof Dr Nasim Fatima both of whom have worked tirelessly and selflessly for the cause of the profession.
Posted by Editor at 4:34 AM 2 comments: