The Ambassador Delegation of the European Union (EU) to Pakistan, Mr Jean-Francois Cautain has remarked that the EU-Pakistan Five Year Engagement Plan was a proof of strong ties between the EU and Pakistan. 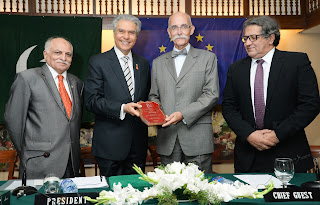 He added that the Generalised System of Preferences (GSP) Plus granted to Pakistan by the EU in 2014 had been very successful in building ties.

He was speaking at a programme, organized by the English Speaking Union of Pakistan (ESUP) at the Beach Luxury Hotel, Karachi, on September 26.

The President of the ESUP, Aziz Memon, formally introduced the distinguished guest who candidly shared his views with the august gathering present on the occasion.

“We may have several issues such as migration, human trafficking, etc, but we are working with Pakistan to tackle all that. We need to look at legal ways of migration. We also need to fight smugglers together. But after GSP Plus, Pakistan’s exports have gone up by 38 per cent. The EU provides the GSP Plus facility to 10 countries including Pakistan,” Jean-Francois Cautain observed. 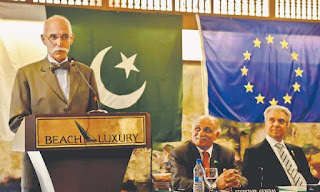 “The EU also provides Official Development Assistance (ODA) funds to Pakistan, especially for education. This is my third visit to Pakistan. Earlier, I was here working with an NGO in Peshawar. Pakistan is a country that I appreciate and love,” he added.

“The UK is still there but a change would take place in 2019. The EU was sad to be losing UK but politicians should not be blaming the EU for their own national failures. The EU was not a project of the past that had lost its ambition. The ambition is still very much there. The EU remains the best tool to strengthen sovereignty. With the USA’s collapse of ambition, we work on climate change, human rights, building peace amid hostility, stability of borders and we are still the largest global market, and we will continue to play a key role in trade. We are capable of producing one-quarter of the world’s wealth,” he said, confirming that the EU still comprised of 28 member countries.

“The EU works at building bridges between its nations for lasting peace. But even if you have peace you don’t take it for granted. From Syria in the Middle East to India there are refugees in search of safe harbours. During the last several months a number of countries have approached the EU, seeking cooperation and a sense of direction while the US takes a back seat in such endeavours. We have given 75 billion euros for human assistance,” Jean-Francois Cautain elaborated. 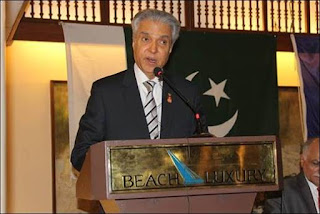 Replying to a question about why Turkey was still not a part of the EU, the ambassador said that Turkey needed to meet EU’s standards in mode of government and fundamental values to be able to be a part of the EU.

Answering to another question concerning the Rohingya Muslims in Myanmar, he considered it a tragedy, stating that the issue was close to their heart and they were looking for the solutions.

Jean-Francois Cautain was uncertain how the EU could persuade India to talk with Pakistan to discuss Kashmir.

“We are not sure in what capacity the EU could help in this matter. The issue of Kashmir and the human rights issues there need to be dealt with by Pakistan and India on their own,” he opined.
Posted by Editor at 1:38 PM No comments:


The department of Urdu of the University of Karachi, with the collaboration of the Anjuman Tariqqi Urdu and Higher Education Commission (HEC) will be organizing an international conference to commemorate the 200th birth anniversary of Sir Syed Ahmad Khan from October 16 to 18.

The central theme of the conference will be focused on Sir Syed Ahmad Khan’s contribution to literature, culture and history of South Asia.

The department of Urdu of the University of Karachi, under its dynamic chairperson, Prof Dr Tanzeem-ul-Firdous, has taken up the initiative of holding a mega event to pay tribute to the multi-faceted personality of Sir Syed Ahmad Khan, who is credited to have played the lead role in the reawakening of the Muslims of South Asia.

The three-day international conference will throw light on the monumental contributions of the legendary scholar and educationist who changed the mindset and the thinking of the Muslims, successfully persuading them to take to modern system of education. 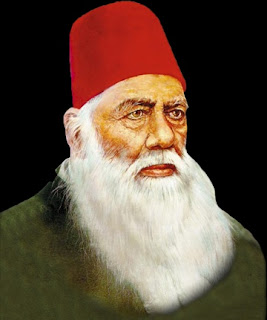 During the conference, Sir Syed Ahmad Khan’s role in the promotion of Urdu literature will also be discussed while a few speakers will present papers on his legendary services to the field of education.

It’s in the fitness of things that the department of Urdu, having a prominent position in the University of Karachi for research, has chosen to take part in the 200th birth anniversary celebrations of the great Sir Syed Ahmad Khan in a befitting manner. Over 75 scholars of the department have already completed their Ph.D. research programme while about a dozen projects were in progress.

Historically the department had come into existence way back in 1955 when the University of Karachi decided to organize postgraduate classes in Urdu under its own management instead of through the colleges.

At the time of its establishment, Moulvi Abdul Haq, ‘Baba-e-Urdu’ was designated as honorary Professor and the Chairman of the department while the teaching responsibilities were carried out by the teachers of local colleges.

Later Dr Ghulam Mustafa Khan, a prominent scholar and Professor at Urdu College Karachi, was appointed both as a cooperative teacher and as the Chairman of the department. In the same year, Dr Abul Lais Siddiqui was appointed as a Reader and Chairman and Dr Abdul Qayyum, Dr Syed Shah Ali, and Qudratullah Fatimi joined as lecturers. 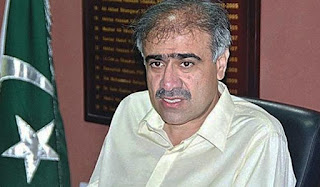 He issued these directives while reviewing Muharram Contingency Plan 2017.

"Police emergency camps must be established along the route of main mourning processions so as to respond to rapidly in any unwanted situation", the Home Minister stressed.

Sohail Siyal urged upon police officers to ensure, at police stations level, the proper identification of outsiders who are being accommodated at hotels, guests house and other temporary residents specially near and around bus terminals, railway stations, suburban and slums areas. 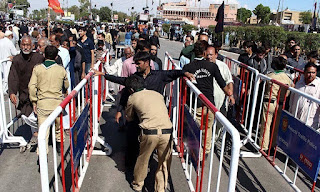 He directed that all possible steps should also be taken for continuous watch on places of majalis and processions besides technical sweeping, scanning and clearance from bomb disposal squads.

The Home Minister also instructed to adopt every step for removal of encroachments, abandoned or out of order vehicles near and around Majalis and route of processions besides deploying snipers at selected high rise buildings.

According to the Muharram contingency plan, Police is ensuring strict security cover at over 1520 Imambarghas, about 12700 Majalis, 4150 mourning processions and 1400 Tazia processions in the Province.

The security plan disclosed that specific instructions have been passed on to ensure removal of posters, banners and confiscation of hate material, surveillance and monitoring of activists of proscribed organizations borne on IVth schedule of ATA -1997, electronic and visual surveillance, use of sniffer dogs for explosives detection and sweeping of routes and venues by BDU especially under construction buildings, DB boxes of electricity and telephones, sewerage lines and manholes.

The Home Minister directed to ensure timely coordination meetings with the religious leaders and Ulemas of different sects at range/zone, district and PS level for implementation of code of conduct for maintaining peace and harmony during Muharram.
Posted by Editor at 2:31 AM No comments: 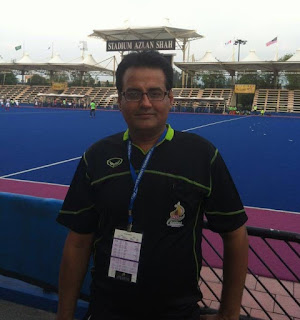 Former International Hockey player, Mubashir Mukhtar, has appreciated the efforts of the Pakistan Hockey Federation (PHF) for revival of international hockey in Pakistan.

In this regard he referred to organizing of Nishan-e-Haider Hockey tournament and arrival of the Hall of Fame World Eleven in Pakistan besides holding of Pakistan Super Hockey League next year will lead to complete revival of international matches in the country.

Talking to PNFS, Mubashir, who is now serving as Director Sports in a private engineering university, was confident that the decisions and steps being taken by the PHF President, Brig (Rtd) Khalid Sajjad Khokhar, and the Secretary General, Olympian Shahbaz Ahmed, will enable Pakistan to regain its lost stature in the world of hockey.

He observed that the successful talks held with the officials of PHF's Executive Committee in Dubai, have started yielding positive results and Nishan-e-Haider Hockey Tournament, in which eleven international goalkeepers will be participating, is the first step towards revival of international hockey in Pakistan.

He said that it will be the first occasion when international hockey players will be participating in a country's domestic event.

Similarly he expressed delight with the upcoming planned arrival of World Eleven in November this year will bring activity in the hitherto deserted grounds of Pakistan with Pakistan playing a three-match series with the World Eleven in Karachi, Lahore and Rawalpindi.

Thereafter in the next year holding of Pakistan Super Hockey League will not only help explore the new talent but also contribute to complete revival of international hockey in the country.
Posted by Editor at 2:14 AM No comments: 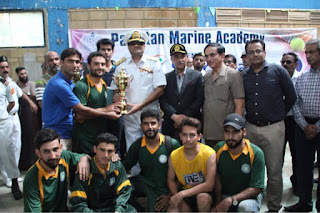 A number of events were organized in connection with the Defence Day of Pakistan across the country with the highlight of the day being the function held at the General Headquarters in Rawalpindi to pay tribute to the martyrs.

As many as 14 educational institutions from all over the metropolis took part in five disciplines which included table tennis, badminton, volleyball, basketball and squash.

Aga Khan University (AKU) emerged as the overall champions of the gala as its athletes came up with impressive all-round performance to run away with the trophy. 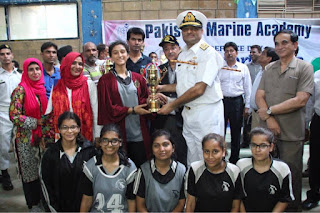 The Sir Syed University of Engineering and Technology (SSUET), having enjoyed success in quite a few sporting contests in the recent past, took part in the men’s events of table tennis, badminton, volleyball and basketball.

The SSUET claimed the runners-up spot in volleyball, bagged third position in table tennis and ended as losing semifinalists in badminton.

The Deputy Mayor of Karachi, Arshad Vohra, distributed the prizes alongwith the Commandant PMA, Commodore Akbar Naqi, while the SSUET Registrar, Syed Sarfraz Ali, and the SSUET Additional Registrar, Mohammad Aamir, were also present in the ceremony.
Posted by Editor at 10:55 AM No comments: