Adab-o-Kutub Khana, the flagship annual publication of Bazm-e-Akram, a literary and social forum of the library scientists, named after Prof Dr Ghani-ul-Akram Sabzwari, has moved a step ahead by having a couple of editions during the calendar year of 2018. 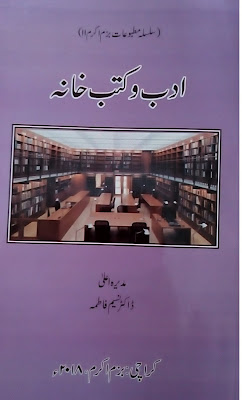 The 10th edition of Adab-o-Kutub Khana, brought out on the eve its due date of publication in January 2018, has been followed by its11th edition within a span of a few months.

The Chief Editor of Adab-o-Kutub Khana, Prof Dr Nasim Fatima, one of the most revered personalities to have emerged from the arena of library and information science, now has to take the decision whether to make the publication biannual or revert to its annual periodicity.

Having worked with missionary zeal over the years to strengthen and expand the forum of Bazm-e-Akram besides improving and regularizing its flagship publication, she faces another arduous task of making the tough call.

While the former Chairperson of the Department of Library and Information Science at the University of Karachi has been extremely successful in motivating the library professionals, otherwise infamous for not looking beyond their own nose, in writing and contributing for Adab-o-Kutub Khana, there are some other challenges to be met before she could decide its periodicity in future.

Her perseverance and inspiration have resulted in the generation of high quality content in abundance for Adab-o-Kutub Khana but the final decision in this regard could be hinged to the other resources.

Adab-o-Kutub Khana-11, despite being published within months of the previous edition, contains most of its usual ingredients of prose, fiction and poetry.
Posted by Editor at 11:54 PM 1 comment:


Arif Habib, one of the top entrepreneurs of the country, shared the recipe for the revival of Pakistan’s economy is keynote address at a gathering of the English Speaking Union of Pakistan (ESUP) held at Beach Luxury Hotel, Karachi, on October 23.

Aziz Memon, President, ESUP, formally introduced Arif Habib before the latter came up with a detailed presentation of the ailing economy and the proposed corrective measures to put it back on track.

While Arif Habib’s thought-provoking points captivated the audience, which also included foreign diplomats, for more than an hour, the question-answer session was equally enlightening as the relevant queries were replied in detail by the chief guest of the evening.

Arif Habib emphasized on declaring ‘export emergency’ in the country in an effort to boost the foreign exchange reserves, advising the government to take the necessary steps on a war footing.

He also threw light on the benefits of the China-Pakistan Economic Corridor (CPEC) which he felt could be the game changer for the economy of Pakistan.

At the end of his speech, Arif Habib was presented a graceful plaque by the ESUP President, Aziz Memon, who himself moderated the question-answer session.

The proceedings were conducted by the ESUP Secretary General, Majyd Aziz, while the vote of thanks was presented by the ESUP Vice President, Tariq Ikram, a former Chairman of the then Export Promotion Bureau (EPB), later renamed as the Trade Development Authority of Pakistan (TDAP).
Posted by Editor at 6:17 AM 1 comment: 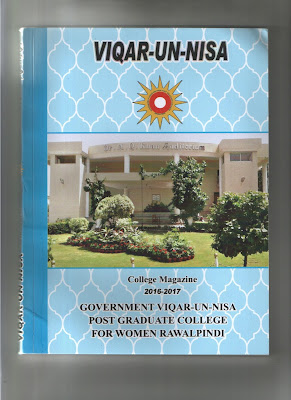 The Government Viqar-un-Nisa Post Graduate College for Women in Rawalpindi has demonstrated its proactive approach by keeping pace with the times as it has been maintaining its Twitter and Facebook pages, showcasing its activities on a regular basis.

The recently published annual magazine of the college titled ‘Viqar-un-Nisa’ has a segment by the name of ‘Media Section’ which documents the press clippings as well as the pictures of the various events organized by them during the period under review.

In fact the Government Viqar-un-Nisa Post Graduate College for Women also has in place an entity by the name of The Media Club, which is a healthy sign reflecting the desire to share their activities not only with their own students but also communicate it to the education fraternity worldwide.

The coverage of their college events in leading television channels and eminent newspapers of the country seems to be the result of consistent hard work and sound planning on part of their authorities for which they deserve accolades. 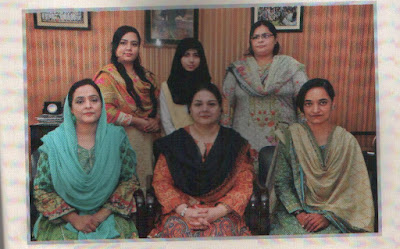 The college Principal, Prof Dr Saira Mufti, and the Incharge College Magazine, Prof Dr Huma Zafar, alongwith their entire team, deserve to be complimented for having brought out the latest issue of ‘Viqar-un-Nisa’ which has also been distributed to the relevant circles including media.

Like any other high-quality college magazine, ‘Viqar-un-Nisa’ is also studded with contents which are interesting as well as informative.. The editorial boards of Urdu and English must have worked industriously to put together such a wonderful publication. 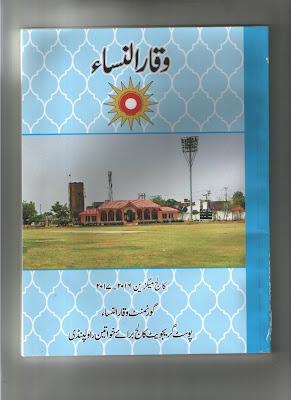 There are all kinds of ingredients and flavours with pieces of serious literature as well as articles of humour and satire. There are short stories besides research articles, essays, interviews, quotations, historical facts, poetry, fiction and so many other things.

The publication of ‘Viqar-un-Nisa’ justifies the mission statement of the college in letter and spirit.

“At Government Postgraduate Viqar-un-Nisa College for Women we help and encourage the students to nurture her talents and overcome shortcomings by providing appropriate, curricular and extra-curricular education, which enables the student to develop her personality and equips her to face the challenges of life. The future is in the hand of these daughters who in the long run have to rear families.”

Indeed the role of an educational institution today is beyond pursuing academic excellence and it are the colleges like this one which truly motivate and empower its students to be lifelong learners, critical thinkers, and productive members of an ever-changing global society.
Posted by Editor at 1:26 PM 4 comments: