The Sir Syed University of Engineering and Technology (SSUET) and the University of Karachi have entered into an agreement whereby the two reputed institutions will work together in the fields of research and training programmes. In this regard a Memorandum of Understanding was signed between them on July 28. 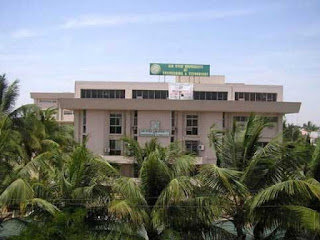 The MoU was inked by the SSUET Vice-Chancellor, Prof Dr Jawaid H Rizvi and the University of Karachi Vice Chancellor, Dr Mohammed Qaiser, at a ceremony held in the SSUET’s auditorium.

Speaking on the occasion the SSUET Chancellor, Jawaid Anwar, highlighted the significance of research in the development of a country and said that SSUET is all set to achieve this objective by promoting research activities.

Referring to the MoU signed with University of Karachi, he observed that it will prove to be of great significance in promoting the cause of modern research in the fields of interest of the two institutions. Emphasizing the importance of research, he pointed out, that no country can march forward without it.

The Chancellor remarked that although MoUs were signed but their terms were generally not implemented in letter and spirit. In order to make this MoU effective and working tool, he advised the two institutions to appoint their focal persons for the purpose of implementations of its related terms.

The Vice-Chancellor of the University of Karachi, Dr Mohammed Qaiser, described the present as an era of inventions, innovations and research, believing that it’s very difficult to achieve the desired goals of development without entering into the field of modern research. 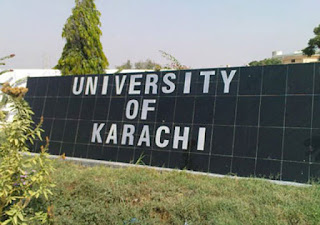 In this regard he emphasized the imperative need for exchange of information in every field to augment the research activities and to cope with the present day challenges.

Earlier in his remarks the SSUET Vice-Chancellor, Prof Dr Jawaid H. Rizvi, said that the Sir Syed University was the first major and self-dependent engineering university to be established in the private sector.

He highlighted that the university was being run in accordance with the Aligarh spirit whereby it was focusing greatly on dispensation of modern education to the upcoming generation with greater stress on discipline and promotion of brotherhood among students.

In his comments the SSUET Registrar, Syed Sarfraz Ali, reckoned that the agreement will prove an important mile stone in promoting research activities and resultant achievement of national goals of development.

The ceremony was largely attended by chairpersons of various engineering departments and senior faculty members.
Posted by Editor at 12:36 AM No comments:

Alina Fatima from the Al-Murtaza School, Karachi and Hira Naz from Aga Khan Higher Secondary School, Kuragh (Chitral, KPK) scored 93.36 per cent and secured the first position for the Secondary School Certification (SSC). Alina also gained the second position in the elective subjects of the Science Group along with Ali Mehdi from IBA Community College, Khairpur. 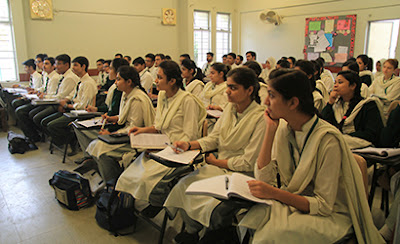 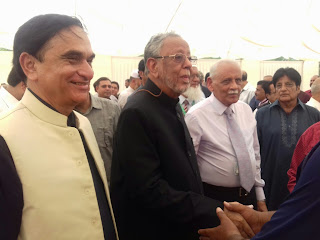 The Chancellor of the Sir Syed University of Engineering and Technology (SSUET), Karachi, Jawaid Anwar, hosted a grand Eid Milan party at the university campus which reopened after a vacation of 10 days on July 11.

Accompanied by Vice-Chancellor Prof Dr Jawaid H. Rizvi and Registrar Syed Sarfraz Ali, the Chancellor mixed up with the faculty members, the university staff and employees and extended to them heartiest greetings. 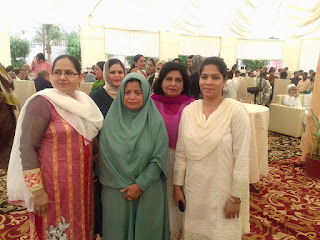 In his informal conversations, the Chancellor highlighted the importance of Eid celebration and described it as a reward from Allah for all those who spent the month long fasting.

He said that the occasion also provided a boost to the spirit of brotherhood. Jawaid Anwar observed that the Eid celebrations not only had religious essence but also carried a social connotation when Muslims showed the spirit of forgiveness and extend charitable support to their less privileged brethren. 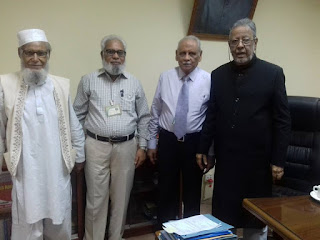 The Eid Milan was thoroughly enjoyed by all the participants as they got an opportunity to mingle informally.
Posted by Editor at 1:00 PM No comments: