While Sindh’s daily COVID-19 numbers kept fluctuating during the week, Karachi registered 75% of the total new cases reported across the province during the last 24 hours ending at 8 am on September 11. 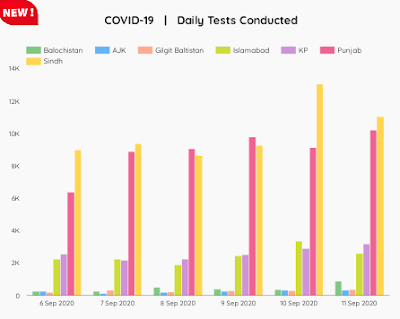 The official data showed that Karachi reported in all 203 infections, against Sindh’s 271, on September 11.

The six districts of the division on average registered 121.5 cases per day during a period from September 5 to 11, while their share in the total daily infection figure ranged from 46% to 75% during the same period.
The Sindh Chief Minister, Syed Murad Ali Shah, in his daily COVID-19 status statement on September 11, confirmed that Sindh detected 271(2.45%) positive cases out of 11,042 samples during the last 24 hours.

He further shared that there were 2,374 active COVID-19 patients in the province, including 2,075 staying at homes, six admitted at the isolation centres and 293 at the various hospitals, adding that there were 148 patients whose health condition was critical while another 17 were on ventilators.

In the meantime, according to an official report, the six patients whose deaths due to COVID-19 were confirmed on September 9 having been hospitalized in Karachi while another patient died at home on September 8.
Posted by Editor at 5:42 AM