Former President Asif Ali Zardari, has asserted that China was a true friend of Pakistan, having provided selfless help to Pakistan's economic development and social progress over the years. 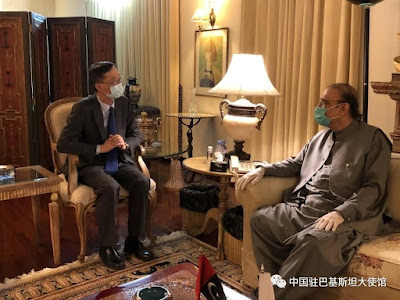 "The Belt and Road Initiative (BRI), proposed by President Xi Jinping is far-sighted. The construction of the China Pakistan Economic Corridor (CPEC) promotes Pakistan’s development and prosperity and improves people’s livelihood,” the former President expressed these views while meeting with the Chinese Ambassador, Yao Jing, at Islamabad on September 10.

“The Pakistan Peoples Party (PPP) firmly supports the BRI as well as the CPEC. Our party hopes to strengthen the exchange of experience in party governance with the Communist Party of China and promote the continuous development of the China-Pakistan all-weather strategic partnership,” Asif Zardari remarked.

Earlier the former President and co-chairman of the PPP, Asif Ali Zardari, alongwith the Vice Chairman of the Senate, Saleem Mandviwala, and Senator Sherry Rahman, upon arrival at the Chinese embassy in Islamabad, were warmly welcomed by Ambassador Yao Jing and Minister Counselor Pang Chunxue.

Ambassador Yao recalled that the PPP and the Bhutto family were old and good friends of the Communist Party of China and the Chinese people, having firmly supported the development of China-Pakistan relations for a long time.

“China attaches great importance to the traditional friendship with the People's Party and is willing to strengthen exchanges and cooperation with it to promote the comprehensive and in-depth development of the relations between the two parties and the two countries,” he added.
Posted by Editor at 12:22 PM